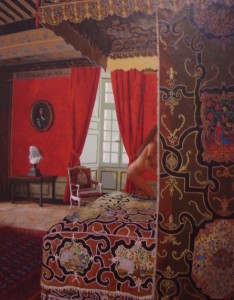 A fine art professional deals with many extraordinary artists throughout their career.  I have been blessed to have more than a handful gracing the walls of the Malton Art Gallery and eventually the homes of our collector clients. Richard Allan George was one of those extraordinary artists that really was the catalyst to my entire career in fine art. Although I never met him, I collected his works first as a client of the Malton Art Gallery and eventually as the owner. His paintings resonated with me in a powerful way. It is an honor to represent his estate through his widow Judith.  It is an honor to be working on a Catalogue Raisonne… compiling his life’s work in one place.  Once complete, it will be apparent that Richard Allan George was one of the most important and defining Post-Modernists of the time.

Richard was born in Chicago, Illinois in 1935 and spent his adolescent years in Ontario, Canada. He studied at the State University in Buffalo, NY and received his Bachelor of Fine Art in 1960. That same year he moved and enrolled in half-time study at the Art Students League and remained there until 1963. He then moved to Ohio and attended Miami University where his talent earned him as Masters of Fine Art in 1971. He met his wife, Judith, a colleague and Art History Professor at Miami University.  His career spanned three decades and despite his health issues (heart and lung) he travelled extensively to paint. His name has appeared in the WHO’S WHO in American Art. His work is in numerous art magazines, exhibitions, and resides in many public and private collections. He also won many awards including the Ohio Arts Council Fellowship and the NEA Regional Visual arts Fellowship.

Abstract Expressionism was the art movement in full swing, when Richard was painting. He decided to direct his work toward realism & surrealism instead. He would collect photos of scenes from the past and then use bits of different photos to create large scale canvases in oil or acrylic. He preferred expressionistic techniques rather than the realistic. He outlined shapes with florescent lines to make them appear vibrant and dots of bright color to create movement. His bright colors, & incredible detail, mixed with those unforgettable nudes created an intriguing and mysterious body of work. He was often asked “well, what is it?” His inscrutable answer was “It is exactly what you think it is!” This would drive the critics mad trying to describe the work or interview the artist. One can see the freedom and celebration in his work but the mix of modern nudes and often Victorian or Edwardian backdrops would leave customers and critics scratching their heads! His nudes are almost always invisible to the clothed figures in the work. What did that mean? Richard’s cagey answer was all you would get out of him.  This was the genius of Richard Allan George and has delighted collectors worldwide.

His wife, Judith, said he painted well into the night, every night, when he wasn’t travelling.

He smoked like a fiend and was not the least sentimental about his work. His work was sold when it was completed. In his one famous story, Judith said she really loved a piece he had finished and asked for it. He gave her the work and then promptly sold it when someone visiting them asked Richard if they could buy it.

Richard’s work forces the viewer to look past the obvious, and search for the deeper meaning…whatever that meaning is to the viewer. Be sure to visit our dedicated website, www.richardallangeorge.com … and enjoy discovering a Master!

This entry was posted in Featured Artisit, Gallery. Bookmark the permalink.