Sarge Marsh’s commercial instincts surfaced when, as a schoolboy photographer, he 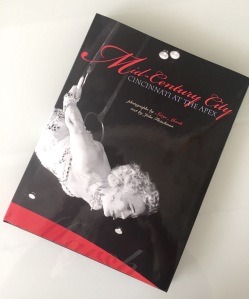 charged his neighbors $1 for portraits of their snow-covered houses. That humble beginning presaged his long career as Cincinnati’s preeminent commercial photographer.

It began with a makeshift darkroom in his family’s fruit cellar and by midcentury he was presiding over a small Fourth street empire of thirty employees. He also kept his photography origins, working for the associated press and Times World Photos, as well as shooting newsreels for Warner-Pathe and Fox Movietone.

While all that was a story in itself, the real Sarge Marsh story was buried in the work, hidden until the abiding interest of art gallery owner Mike Wilger, who bought the Marsh negative collection a few years before Marsh’s death in 2003, at age 87. Attempting to create order out of thousands of negatives stuffed randomly in old file cabinets and cardboard boxes, Wilger began to see-amidst the documentation of big building projects for construction companies and studio portraiture-a photographic history of Cincinnati at the height of its urban life.

It was what John Fleischman calls “,a found portrait, when Cincinnati was the regional capital, the sun that powered its own financial, retail, cultural, entertainment and media solar system.” And that system was what Marsh-whose camera gave him unparalled access and familiarity-unwittingly documented.

His first major aesthetic documentation was the Great Flood of 1937, and his last the building of Riverfront Stadium. In Between were the pictures of Crosley (both the field and the car), Rose and Bench, old Coney Island, Union terminal, the great downtown theatres, and a pre-computer portrait of how people worked in the mid-century: men sweating in their shirtsleeves and women sitting in front of enormous switchboards or processing checks on antediluvian sorting machines.

In Marsh’s universe, movie stars and politicians came and went, the sidewalks were thronged day & night, the inclines still ran up the hills to Mt. Adams, and the airplanes still had propellers.

Sarge Marsh created a portrait of Cincinnati radiating a brash postwar American style that seemed to be spreading around the globe-and Sarge Marsh’s final greatest exhibit.

This entry was posted in Featured Artisit. Bookmark the permalink.